Home » From Hate to Humor to Humanitarianism

From Hate to Humor to Humanitarianism: Alexandra and the Asians 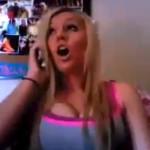 One reason I don’t assign textbooks to my social media classes is that most are outdated by the time they’re published. Indeed, every time I flip on my computer, it seems like Mark Zuckerberg’s been tooling around with his giant virtual antfarm. (“Ooh, what if I move everything from over here to over there?”)

Plus, real life case studies keep popping up that are so much more relevant and compelling.

This past week — while I was teaching social media at UCLA Extension — something happened on campus that provided great classroom material…
I’m talking about Alexandra Wallace, of course, the UCLA student who decided to do her best Don Imus impersonation and ridicule an entire ethnic group, including their families, their language, and the tragedy in Japan. Most of you have likely seen her rant, so I won’t give it the dignity of reposting it here.

Now Wallace was within her rights to say whatever she wanted, since she didn’t advocate violence or defame any particular individual. Indeed, I’ve heard worse at every comedy club here in the ethnic stew that is Los Angeles.

But I don’t know what narcotic Wallace was on — her own adrenaline, perhaps — that compelled her to flatulate on social media, where the bored inhabitants lie in wait for anything to pounce on, either to celebrate or eviscerate. As reality TV has proven, some people will do anything for their 15 minutes of spotlight, but here on the Interwebs, it can last a lot longer than 15 minutes and that spotlight can turn very hot. (“Ooh, what if I focus my magnifying glass on that one over there?”)

Regardless of what you think of Wallace’s diatribe, it did not do her personal brand a service. She’s already felt compelled to leave UCLA, and she might have to change her name and dye her hair another color to shed this baggage, which will live on the Internet forever. Any prospective employer, even one with racist views of his own, might question her judgment. If Wallace were later upset about her job, would she vent another vitriolic video? (Then again, since she’s also a bikini model with show business aspirations, I wouldn’t be surprised if she lands a gig on Fox News.)

Branding lesson: Any of us can find a receptive audience for any view, no matter how wretched, but we have to consider how the larger community (not just our target markets) will respond.

It’s not just the young-and-the-clueless either: In the past few weeks, both Gilbert Gottfried and an MBA-educated worker on Chrysler’s Twitter account lost their jobs for not looking both ways before crossing social boundaries. AFLAC (for whom Gottfried voiced the famous duck) didn’t want their brand associated with someone laughing at tsunami victims. Chrysler didn’t want their brand associated with an F-bomb user — even if they’ve been trying to reposition themselves as Detroit tough by hiring Eminem as the new face of their brand. (Has no Chrysler executive ever listened to an Eminem album?)

This put UCLA in a bind. It’s a public university bound to the First Amendment more tightly than a private university would be — and even a private university might have a hard time dealing with this case. Although out of her mind, Wallace was within her rights. Yet here was the UCLA brand being dinged by one of its own: the school’s name was prominently used in her rant, and her actions would lead some people (likely USC students and alumni) to poke fun at the UCLA community. (Sadly, it’s also led racists to endorse her on YouTube.)

So UCLA issued a statement condemning the video, but did not take punitive action. Then the entire administration heaved a sigh of relief that could be heard across the city when Wallace decided to pack her bags.

Now here’s my favorite part of the case: the reaction by the Asian-American community.

No, not the ones who responded with threats and rants of their own. While expected, anger just stokes the flames and even rallies support for someone like Wallace.

Rather, I’m loving the reaction of one guy in particular: Jimmy Wong, an improv comic and musician in L.A. Check out his response below, which includes a dose of Wallace for reference:

Sure, Wong rips Wallace, but does so with upbeat humor and talent. How brilliant to pen a “love song” to someone who’s engendered so much hate.

I’m often asked how to make videos go viral — and this one certainly did, with 1.3 million views in three days, a writeup in the New York Observer, radio play in Seattle, and more. Yes, Wong is amazingly talented, but there are a lot of amazingly talented people on YouTube trying to get noticed. (As YouTube claims, 35 hours of video are uploaded to the site every minute. Try getting noticed amidst all that.) In addition to talent, Wong combined several k

We are extremely happy with the results. You found a solution to every problem we had. You are first on our go-to list
Deloitte
Maury and his team did a fabulous job! The team was great to work with, creative and quick! They made me look great.
Sprint
(RipMedia) understands people, in both the creative world and the business world. This is a difficult gap to bridge, and they do it with grace and verve. I look forward to working with them again.
Cisco Systems
We definitely recommend you as you are so professional and happy to do such creative work, especially with such a complex project as this.
Stanley Black and Decker
Maury and his team at Rip Media Group did a fantastic job on our short-lead-time motion graphics project. He led the creative process and was quick to wrap his head around the business and technology aspects of our market and products. The output was great. He's adept at working with marketers, business managers, engineers and the "creatives" to produce work…
READ MORE
Spirent
A+ delivery, we loved the team as they really learned what our needs were, and had spot-on solutions. We love the videos.
Ameriquest
Rip MediGroup delivers high-quality promotional videos and I saw that they genuinely helped our startup to be successful!
Spotter Fitness
LexisNexis was searching for the right agency, something innovative, creative, and cutting edge... Rip Media blew us away.
LexisNexis
We were in SHOCK that you got everyone to agree, that is so rare! Loved your discovery process...you deserve pats on the back.
Kaiser Permanente
Thanks to the entire team – outstanding! Couldn’t have come out better.
P. Csathy
You have a big range of original ideas - and they worked very well!! You over achieved…The story, the message, the production and animation was very memorable!
The results were amazing, the upgrade was fantastic! We had a very difficult goal, almost ridiculous based on the time we had, and they over achieved.
Kevin Boyce